How far would you go to make your dreams come true?

For budding writer and filmmaker Noah Spaeth, being a Production Assistant in director Dominick Bambach’s new avant-garde film isn’t enough. Neither is watching Dominick have an affair with the lead actress, the gorgeous but troubled Nevie Wyeth. For Noah’s dream is to get both the film and Nevie in the end, whatever the cost. And this obsession may soon become a reality once Dominick’s spurned wife Isadora reveals her femme fatale nature with a seductive plot to get rid of her husband for good.

Slow Down, a cross between the noir styling of James M. Cain and the dark satire of Bret Easton Ellis, is a thrilling page-turner that holds a mirror up to a media-saturated society that is constantly searching for the fastest way to get ahead, regardless of consequences. 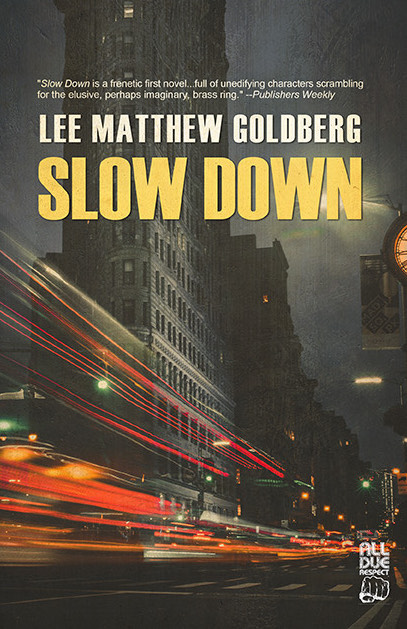 Slow Down is the tale of Noah Spaeth, the man who has everything, but wants more. It’s the story of one upmanship and how far Noah and Dominick will go to get what they want.

A fast paced thriller set in the film industry with all its decadence, drugs and greed.  A gripping, disturbing story of excess, betrayal and corruption. Brilliant.

Thank you to Blackthorn Tours for the opportunity to take part in this blog tour, for the promotional material and a free ecopy of the book. This is my honest and unbiased review.

Lee Matthew Goldberg is the author of the novels THE DESIRE CARD, THE MENTOR, and SLOW DOWN. He has been published in multiple languages and nominated for the 2018 Prix du Polar. The second book in the Desire Card series, PREY NO MORE, is forthcoming in 2020, along with his first Sci-Fi novel ORANGE CITY. His new endeavor will be as the editor-in-chief and co-founder of Fringe Press and Fringe Digital, dedicated to publishing fiction that’s outside-of-the-box. His pilots and screenplays have been finalists in Script Pipeline, Book Pipeline, Stage 32, We Screenplay, the New York Screenplay, Screencraft, and the Hollywood Screenplay contests. After graduating with an MFA from the New School, his writing has also appeared in the anthology DIRTY BOULEVARD, The Millions, Cagibi, The Montreal Review, The Adirondack Review, The New Plains Review, Underwood Press and others. He is the co-curator of The Guerrilla Lit Reading Series and lives in New York City. Follow him at leematthewgoldberg.com.