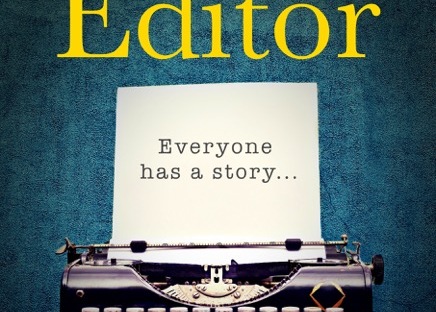 A mysterious advert in a newspaper promising to restore hope to the hopeless brings together four strangers.

None realising they will end up investigating a twisted and troubling crime that threatens their very futures.

Mitch, a former Crime Scene Investigator, Olivia, a brilliant PhD student, and Florence, a middle-aged solicitor, find themselves working with an enigmatic newspaper editor who refers to himself only as Ed.

But when Maddie, a teenage girl, disappears in sinister circumstances, the team are drawn into the hunt for her. And when a neighbour’s body is discovered in a pool of blood, they realise they must use their unique skills in a race against time.

But can they solve the mystery before it’s too late? And before Ed’s shadowy past overcomes them all?

This starts with a leaflet, offering Hope…..it invites people to come to a meeting. Ed the Editor of Newswire is surprised when so many turn up. but he only has places for 3 …So he asks them to write thoughts on What is the best thing about life?

He chooses, Mitchell an ex-CSI who struggles to find meaning in life, Florence a solicitor and Olivia a very clever PHD student who finds life to easy, nothing to work for and no point.

They are all lonely and Edmhas offered them Hope.

But then, a young girl goes missing, a neighbour found in a pool of blood…..and so the story begins. Can this group solve the mystery or are they going to be In danger themselves….

This is not a blood and guts crime thriller, but a more philosophical, psychological thriller that will make you think. Unique and original.

Thank you to Bloodhound Books for the opportunity to participate in this blog tour, for the promotional materials and a free copy of the ebook.  This is my honest, unbiased review.

He was a broadcaster for twenty five years, mostly as a BBC Television, Radio and Online News Correspondent, covering some of the biggest stories Britain has seen.

He now lectures, and coaches companies at the Judge Business School, part of the University of Cambridge, working on presentation skills, branding, pitching, websites, and media profile, both conventional and social.

Simon has had seven books in his tvdetective series published. They focus on a television reporter who covers crimes and gets so involved in the cases he helps the police to solve them.

He has also contributed articles and short stories to a range of newspapers and magazines, written plays, and even a pantomime.

Alongside his novels and stories, Simon is a tutor in media skills and creative writing, teaching at popular Writers’ Summer Schools such as Swanwick and Winchester, for the National Association of Writers’ Groups, at universities including Cambridge and Exeter, on cruise ships and overseas.

Simon has also become sought after as a speaker, appearing at a variety of prestigious literary festivals. His talks combine an insight into his writing work, along with some extraordinary anecdotes from the life of a television reporter, including the now notorious story of What to do when you really need a dead otter.

He began a broadcasting career as a DJ on the radio and in nightclubs, then moved into radio and TV news. He worked in Europe, London, Ireland, and the south west of England, before settling in Cambridge.

Simon is married to Jess, Director of Libraries at the University of Cambridge, and has an adopted daughter, Niamh. She’s an army officer, which makes her father both very proud and very nervous.

Simon also lectures on careers in the media at Cambridge University, and in schools and colleges. Amongst his proudest achievements, he includes the number of young people he has helped into higher education and jobs in broadcasting, and aspiring writers into publication.