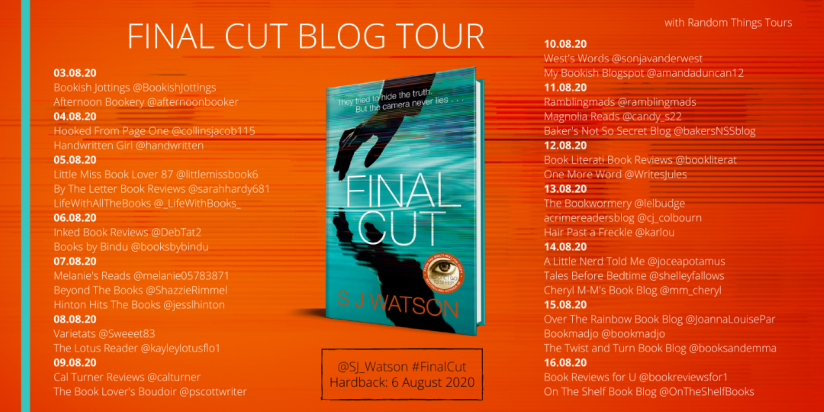 In writing Final Cut I wanted to move away slightly from the entirely domestic, urban and claustrophobic feel of Before I Go To Sleep and open the story world a little. I’m returning to my preoccupations of memory, narrative and identity, though bringing a fresh spin and new maturity to them.

The story follows a young ambitious documentary filmmaker whose first film was lauded and her second less so, and who is struggling with her third film. She hits on the idea of making a film about life in a small, northern village and is persuaded, against her better judgement and for reasons unknown, to film in Blackwood Bay.

Once there she discovers a town shrouded in mystery and full of secrets, that threaten to engulf and ultimately destroy her. She has to dig deep to save herself, as well as the lives of others.

In researching the book, I was drawn to the idea of the way we document our lives now, on Instagram and Twitter etc., and the downsides of that, as well as the darkness that can hide in plain sight and the abuses that people can visit on their fellow humans. The sad fact is I had to tone down some of the horrific atrocities I read about, or else the book would’ve been too dark, even for me.

Alex is a filmmaker, she has a new project and arrives in Blackwood Bay, a place she didn’t want to go.

It’s here she begins a search to find out what really happened to the missing girls. What she finds brings back memories long hidden. Just who in this quiet village wants the secrets kept buried?

I can’t say much more for fear of spoiling this marvellously dark and twisty plot, but I can say it’s so packed with tension it will give you the chills.

SJ Watson builds a taut psychological thriller with great descriptive writing,  I felt I knew Blackwood Bay (really reminds me of Robin Hoods Bay) and the almost claustrophobic atmosphere of a small community with its secrets and darkness. Just brilliant and I loved it.

Thank you to Random Things Tours for the opportunity to take part in this blog tour, for the promotional material and an ARC of Final Cut. This is my honest and unbiased review.

SJ. Watson’s first novel, Before I Go To Sleep, became a phenomenal international success and has now sold over 6,000,000 copies world- wide. It won the Crime Writers’ Association Award for Best Debut Novel and the Galaxy National Book Award for Crime Thriller of the Year. The film of the book, starring Nicole Kidman, Colin Firth and Mark Strong, and directed by Rowan Joffe, was released in September 2014. S. J. Watson’s second novel, Second Life, a psychological thriller, was published to acclaim in 2015. S. J. Watson was born in the Midlands and now lives in London.