I am delighted to share the news that uber driver turned best-selling sensation Adrian McKinty has won the UK’s most prestigious crime novel award, Theakston Old Peculier, for his page-turning thriller The Chain.

The Chain was chosen by public vote and the prize Judges, triumphing against a tremendously strong shortlist – including books from Oyinkan Braithwaite, Helen Fitzgerald, Jane Harper, Mick Herron and Abir Mukherjee – at a time when the UK is experiencing a boom in crime fiction. Adrian’s hit thriller marks the turning point in his life that has led him to a series of success, as he became a bestseller in 20 countries and had Universal snap up the film rights in a seven-figure deal.

Adrian McKinty said: “I am gobsmacked and delighted to in this award. Two years ago, I had given up on writing altogether and was working in a bar and driving an uber, and so to go from that to this is just amazing. People think that you write a book and it will be an immediate bestseller. For twelve books, my experience was quite the opposite, but then I started this one. It was deliberately high concept, deliberately different to everything else I had written – and I was still convinced it wouldn’t go anywhere… but now look at this. It has been completely life changing.”

Congratulations …..a fantastic read it is too…..

Harrogate, Thursday 23 July: Belfast born Adrian McKinty has been awarded the UK’s most prestigious accolade in crime writing, the Theakston Old Peculier Crime Novel of the Year, for his best-selling thriller,The Chain, that sees parents forced to abduct children to save the lives of their own.

This phenomenal success comes after Adrian’s family were evicted from their home, forcing him to put down his pen and find work as an Uber driver and bar tender to make ends meet. Persuaded to give his dream one last go, Adrian began writing what would become his smash hit sensation The Chain, now a bestseller in over 20 countries with move rights snapped up by Universal in a seven figure deal to bring this chilling masterpiece to life on screen.

Described by Don Winslow as ‘nothing short of Jaws for parents’, The Chain was chosen by public vote and the prize Judges, triumphing against a tremendously strong shortlist – including books from Oyinkan Braithwaite, Helen Fitzgerald, Jane Harper, Mick Herron and Abir Mukherjee – at a time when the UK is experiencing a boom in crime fiction, with the genre exploding in popularity during lockdown and sales soaring since bookshops have reopened.

The news was revealed in a virtual awards ceremony on what would have been the opening night of Harrogate’s legendary Theakston Old Peculier Crime Writing Festival, which was cancelled due to the pandemic. Instead, the announcement of this coveted trophy has marked the launch of the HIF Weekender, Harrogate International Festival’s free virtual festival bringing world-class culture to everyone at home, featuring performances and interviews with internationally acclaimed musicians, best-selling authors and innovative thinkers.

Executive director of T&R Theakston, Simon Theakston, said: “Looking at the titles in contention for the Theakston Old Peculier Crime Novel of the Year 2020, it is clear to see why crime fiction remains the UK’s genre of choice. Adrian McKinty is a writer of astonishing talent and tenacity, and we could not be more grateful that he was persuaded to give his literary career one last shot because The Chain is a truly deserving winner. Whilst we might be awarding this year’s trophy in slightly different, digital circumstances, we raise a virtual glass of Theakston Old Peculier to Adrian’s success – with the hope that we can do so in person before too long, and welcome everyone back to Harrogate next year for a crime writing celebration like no other.”

Harrogate International Festivals’ is a charitable organisation with a mission to present a diverse year-long programme of live events that bring immersive and moving cultural experiences to as many people as possible. Delivering artistic work of national importance, the Festival curates and produces over 300 unique and surprising performances each year, celebrating world-renowned artists and championing new and up-coming talent across music, literature, science, philosophy and psychology. The HIF+ ongoing education outreach programme engages schools, young people and the local community with workshops, talks, projects and inspiring activities, ensuring everyone can experience the Festival’s world class programme and the transformative power of the arts.

Established in 1966, Harrogate International Festivals are an artistic force to be reckoned with and a key cultural provider for the North of England.

Find out more at:

About Theakston Old Peculier Crime Novel of the Year Award

Launched in 2005, the Theakston Old Peculier Crime Novel of the Year Award is the most prestigious crime novel prize in the country and is a much-coveted accolade recognising the very best crime writing of the year. Previous winners include Mark Billingham, Val McDermid, Belinda Bauer, Denise Mina, Lee Child, Clare Mackintosh and last year’s champion Steve Cavanagh, who was awarded the trophy for the fifth book in his Eddie Flynn crime thriller series, Thirteen.

The award forms part of the Theakston Old Peculier Crime Writing Festival, staged by Harrogate International Festivals in the Old Swan Hotel, Harrogate, and is traditionally awarded on the opening evening of the festival.

The 2020 award is run by Harrogate International Festivals in partnership with T&R Theakston Ltd, WHSmith and the Express. It is open to full length crime novels published in paperback from 1 May 2019 to 30 April 2020 by UK and Irish authors.

The longlist of 18 titles was selected by an academy of crime writing authors, agents, editors, reviewers, members of the Theakston Old Peculier Crime Writing Festival Programming Committee, and representatives from T&R Theakston Ltd, the Express, and WHSmith, with the shortlist and winner selected the academy, alongside a public vote and the winner receiving £3,000, and a handmade, engraved beer barrel provided by Theakston Old Peculier.

Adrian McKinty was born and grew up in Belfast, Northern Ireland during the Troubles of the 1970s and 1980s. His father was a boilermaker and ship’s engineer and his mother a secretary. Adrian went to Oxford University on a full scholarship to study philosophy before emigrating to the United States to become a high school English teacher. His books have won the Edgar Award, the Ned Kelly Award, the Anthony Award, the Barry Award and have been translated into over 20 languages. Adrian is a reviewer and critic for The Sydney Morning Herald, The Irish Times and The Guardian. He lives in New York City with his wife and two children.

YOUR PHONE RINGS.  A STRANGER HAS KIDNAPPED YOUR CHILD.  TO FREE THEM YOU MUST ABDUCT SOMEONE ELSE’S CHILD.  YOUR CHILD WILL BE RELEASED WHEN YOUR VICTIM’S PARENTS KIDNAP ANOTHER CHILD.  IF ANY OF THESE THINGS DON’T HAPPEN: YOUR CHILD WILL BE KILLED.  VICTIM. SURVIVOR. ABDUCTOR. CRIMINAL. YOU WILL BECOME EACH ONE.  YOU ARE NOW PART OF THE CHAIN.

‘You have never read anything quite like The Chain and you will never be able to forget it. Brilliant. Beautifully written. A masterpiece of tension. It scared the hell out of me but I could not put it down! The Chain belongs in the elite company of world-class thrillers like Gone Girl and The Silence of the Lambs. This is nothing short of Jaws for parents’ – Don Winslow

‘A masterpiece. The Chain is one of the finest novels ever produced in the genre – up there with Marathon Man and Red Dragon. It just doesn’t get any better than this. I may not read a better thriller in my lifetime’ –Steve Cavanagh

‘McKinty is one of the most striking and most memorable crime voices to emerge on the scene in years. His plots tempt you to read at top speed, but don’t give in: this writing — sharply observant, intelligent and shot through with black humor — should be savored’ – Tana French

‘The Chain is diabolical, unnerving, and gives a whole new meaning to the word ‘relentless.’ McKinty just leapt to the top of my list of must-read suspense novelists. He writes with confidence, heart, and style to spare. He’s the real deal’ – Dennis Lehane

Dora O’Brien had a good start in life, but things went bad when she began to mix with the wrong company. Pregnant by her gangster lover, she found herself on the streets and then in the grips of a bent copper called Donny Maguire.

When her daughter Angel is born, Dora is already under the influence of drink and drugs, and handed around to Donny’s mates. Growing up in the shadow of her mother’s abusive relationship, Angel is nothing like her mother, but when matters turn murderous, Angel is forced to grow up fast and survival becomes the name of the game.

For some, being on the wrong side of the law is the safest place to be . . .

The Knock is a gritty crime thriller set in the gangland world. It tells the story of Dora, the girlfriend of a gang ‘boss’. She’s pregnant, but the baby isn’t his……

When Angel is born, she grows to see her mum, now a mess due to booze and violence. Will Angel be another victim?

This is a pulse racing thriller, it’s dark and violent with great characters, some of which are truly reprehensible. You are willing Angel on, with the hope she will escape. A character driven tale that’s a real page turner……

Thank you to Emma at Busy Bee PR for an ARC of The Knock. This is my honest and unbiased review. 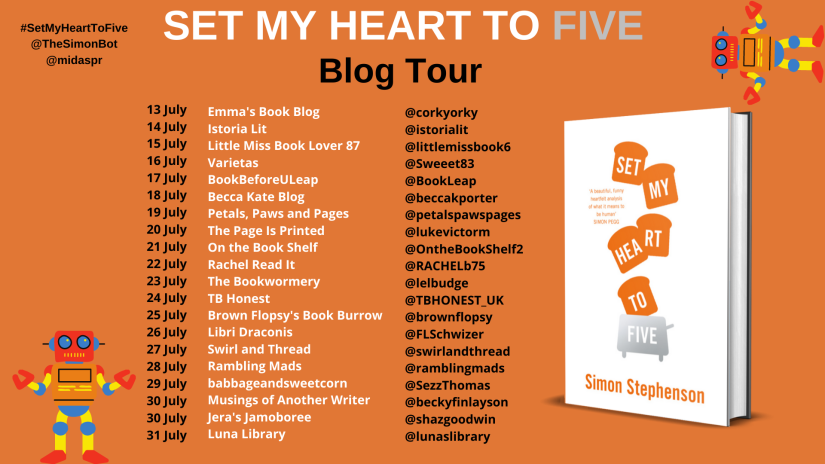 A story of loneliness, love and loose connections, Set My Heart to Five is a hilarious, touching, dazzlingly perceptive debut novel, and a profound exploration of what it truly means to be human.

Because friends are a function of feelings.

Therefore friends are just one more human obligation that Jared never has to worry about.

But Jared is worrying. Which is worrying. He’s also started watching old films. And inexplicably crying in them. And even his Feelings Wheel (given to him by Dr Glundenstein, who definitely is not a friend) cannot guide him through the emotional minefield he now finds himself in.

Soon his feelings will send him fleeing across the country, pursued by a man who wants to destroy him and driven by an illogical desire to share pathogens with the woman who bamboozles him the most.

Because feelings will ruin your life, especially if you aren’t supposed to have them…

Jared is a dentist, he’s also a bot.

Set in a time where the jobs humans no longer want to do are now done by androids.

But, Jared is different, he is interested in humans and their emotions, so with help from a friend, Jared begins to experience feelings himself…..(a little reminiscent of iRobot).

Told by Jared this unique tale is part narration and part movie script….he loves movies. It shows how odd human emotions appear when viewed from the outside.

Thank you to Amber at Midas PR for the opportunity to take part in this blog tour, for the promotional material and an eARC of Set My Heart To Five. This is my honest and unbiased review.