Hirsch is a whistle-blower. Formerly a promising metropolitan detective, now hated and despised, he’s been exiled to a one-cop station in South Australia’s wheatbelt. Threats. Pistol cartridge in the mailbox.

So when he heads up Bitter Wash Road to investigate gunfire and finds himself cut off without backup, there are two possibilities. Either he’s found the fugitive killers thought to be in the area. Or his ‘backup’ is about to put a bullet in him.

He’s wrong on both counts. But Tiverton when the next call-out takes him to the body of a sixteen-year-old girl, his investigation has disturbing echoes of the past he’s trying to leave behind… 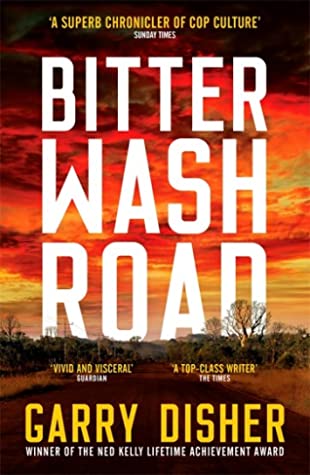 #1 in the Paul Hirschhausen series.

Set in Australia, Constable Paul Hirschhausen, known as Hirsch, is now working in the Single Officer Police station after being moved to the remote town for whistleblowing. He in a small town where other cops make his life difficult to say the least.

So when reports of gunfire on the Bitter Wash Road, Hirsch is sent to investigate, he finds it’s just kids target shooting, but then finds the body of a hit and run victim on the roadside. Soon after there is another death, a suicide ?. Hirsch starts to wonder if there’s a link between the deaths but his odious boss doesn’t want them investigated…..why?

A tale of murder and corruption in a small town with a mix of suspects and plenty of twists to keep you guessing. With its clever plot and atmospheric setting this is a gripping, engrossing thriller.

Thank you to Rachel at Viper books for the opportunity to read Bitter Wash Road for free. This is my honest and unbiased review.

Garry Disher was born in 1949 and grew up on his parents’ farm in South Australia.

He gained post graduate degrees from Adelaide and Melbourne Universities. In 1978 he was awarded a creative writing fellowship to Stanford University, where he wrote his first short story collection. He travelled widely overseas, before returning to Australia, where he taught creative writing, finally becoming a full time writer in 1988. He has written more than 40 titles, including general and crime fiction, children’s books, textbooks, and books about the craft of writing