From the screenwriter of The Imitation Game comes a knockout thriller that reads as 12 Angry Men meets Serial.

It was the most sensational case of the decade.

Fifteen-year-old Jessica Silver, heiress to a billion-dollar fortune, vanishes on her way home from school. Her teacher, Bobby Nock, is the prime suspect. It’s an open and shut case for the prosecution, and a quick conviction seems all but guaranteed.

Until Maya Seale, a young woman on the jury, persuades the rest of the jurors to vote not guilty: a controversial decision that will change all of their lives forever.

Ten years later, one of the jurors is found dead, and Maya is the prime suspect.

The real killer could be any of the other ten jurors. Is Maya being forced to pay the price for her decision all those years ago? 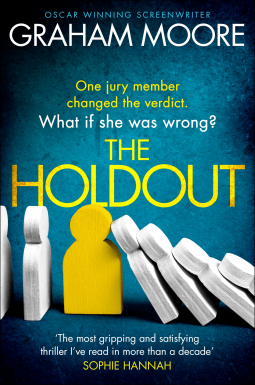 10 years ago Bobby Nock was on trial for the murder of 15 year old Jessica Silver. The 12 members of the jury deliberated and one of them believed Bobby to be innocent.

Maya Seale does a ‘12 Angry Men’ and manages to persuade the other 11 and so Bobby goes free. But this was not a popular verdict with the American public and the media frenzy lasted a long time and affected their lives in different ways.

Now, a podcast, Murder Town, which discussed the trial, the verdict and the jurors, is now being made into a docuseries by Netflix. The original jurors, well the majority, are taking part. Maya, now a defence lawyer eventually agrees to take part.

They are all staying at the original hotel they were in during the original trial, then there is a death and Maya is arrested on suspicion of murder. Can she prove her innocence? Is there more to the Bobby Nock case than she first believed?

I really enjoyed this legal thriller, the chapters alternating between the past and present really build the story perfectly.

Graham Moore is a New York Times bestselling novelist and Academy Award-winning screenwriter. His screenplay for THE IMITATION GAME won the Academy Award and WGA Award for Best Adapted Screenplay in 2015 and was nominated for a BAFTA and a Golden Globe. The film, directed by Morten Tyldum and starring Benedict Cumberbatch and Keira Knightley, received 8 Academy Award