He doesn’t need a weapon. He is the weapon.

After losing his powers in an epic battle between good and evil, former sorcerer Nate Garrett finds himself living as a humble human in Clockwork, Oregon. While the world thinks Nate is dead, his friends continue to fight against Avalon and the evil it’s intent on spreading.

Avalon’s forces turn up in Clockwork, and Nate’s frustration grows with every passing day his magic doesn’t return. He finds himself trying to stop Avalon’s plans while hiding from enemies who would destroy everything in their path to see him dead.

Avalon’s darkness begins to threaten the people Nate cares about, and an old nemesis returns; magic or no magic, he has no choice but to fight. But will Nate see his magical powers reborn before the entire town—and everyone he loves—is destroyed?

Humans, Norse gods, Hades, Giants and Asgard all mixed with magic and war.

Nate is human, his magic lost in an earlier battle and believed dead…..but the battles against evil are still ongoing. So, Nate tries to find another way to stop Avalon. But will his magic return?

Wow, what an incredible world Steve McHugh has created, it has everything you could wish for in a tale of war between good and evil. Heroes, Gods, Magic and enough fights to make Nate the Jason Bourne of the fantasy world …..there’s even a werewolf. Great, likeable well developed characters with a detailed plot and some emotional moments too. A fantastic, action packed read. 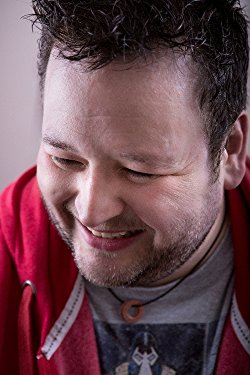 Steve’s been writing from an early age, his first completed story was done in an English lesson. Unfortunately, after the teacher read it, he had to have a chat with the head of the year about the violent content and bad language. The follow up ‘One boy and his frog’ was less concerning to his teachers and got him an A.

It wasn’t for another decade that he would start work on a full length novel, the result of which is Crimes Against Magic.

He was born in a small village called Mexborough, South Yorkshire, but now lives with his wife and three young daughters in Southampton.