The Future of Another Timeline is a dark thriller from Annalee Newitz, the founding editor of io9, about the lengths we’ll go to protect the ones we love. In a modern-day United States that’s just a step away from our own, time travel is possible. But a secret war is brewing over access to history.

Tess is a geologist desperately trying to change the past.

Beth is a teenage riot grrl who has witnessed a murder that will forever shape her future.

Across the timeline, a group of men are trying to destroy time travel. If they succeed, only a small elite will have the power to shape the past, present, and future.

A final confrontation is coming. Our only hope lies with an unlikely group of allies, their lives separated by centuries, battling for a world where anyone can change the future. 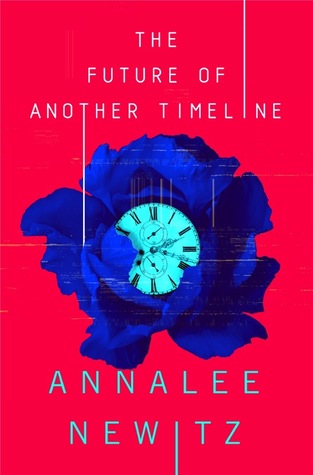 The Future Of Another Timeline, a sci-fi novel about time travel? Oh no it’s so much more than that.

Someone is travelling back in time, in ancient time machines, to edit the timeline to eradicate women’s rights, including their reproductive right to abortions etc. The Daughters of Harriet, a feminist group are intent of stopping this one mans plan. (It’s a worry that even now In this present day, a room of middle aged men sit and make decisions on women’s reproductive rights!)

The story centres around Tess, a traveller, who wants to help fix things, including her own past. What happened in those heady punk days of 1992?

She travels back and meets a wonderfully diverse group of feminist activists fighting the misogyny…..Will they succeed?  Will Tess get back to her own timeline?

This is a tale of relationships, friends and love and loss, with some time travel too. As in real life, a small change can have a much bigger impact than expected. It has violence, love and a lot of emotions too. It’s sharp, clever, feminist, queer, inclusive, totally amazing and utterly compelling. I loved every minute of it.

My thanks to Orbit Books for a free copy of this marvellous book. This is my honest and unbiased review.
You can buy a copy here

Annalee Newitz is an American journalist who covers the cultural impact of science and technology. They received a PhD in English and American Studies from UC Berkeley, and in 1997 published the widely cited book, White Trash: Race and Class in America. From 2004–2005 they were a policy analyst for the Electronic Frontier Foundation. They write for many periodicals from ‘Popular Science’ to ‘Wired,’ and from 1999 to 2008 wrote a syndicated weekly column called ‘Techsploitation.’ They co-founded ‘other’ magazine in 2002, which was published triannually until 2007. Since 2008, they are editor-in-chief of ‘io9,’ a Gawker-owned science fiction blog, which was named in 2010 by The Times as one of the top science blogs on the internet.(Courtesy of Goodreads)