Carnegie Fitch, once-upon-a-time drifter and now half-assed private eye, has a sharp tongue, a cheap suit and dog-bite marks on his fedora. Yes, that’s just how he rolls through the downtown streets of Vancouver, BC, Canada, aka Terminal City, circa 1957, a land of neon signs, 24-hour diners and slumming socialites.

Fitch gets the case of a lifetime when he gets caught up in the death of a janitor with a checkered past as a circus performer and a stash of ill-gotten gains. And since nothing attracts the moths quite like the glow of a pot of gold at the end of the rainbow, he will cross paths with a series of lowlifes and nut jobs, including a gang of criminal clowns, a femme fatale with beaucoup daddy issues and an off-kilter circus elephant named Mary with a taste for human fear.

See, Fitch has always dreamed of the big score, the buried treasure, the duffel bag full of cash. Because that’s fat city, the place to be. Easy money. The good life, where the whisky flows like water and you never get a bill. But what if nothing is as it seems and chasing the dream means getting knocked silly not once but twice and ending up in a hospital bed, pissing blood after being repeatedly kidney punched by a psycho clown with no moral compass?

And what if that’s not the worst that will happen?

What if Fitch is forced to dig through his past to sort out who he is and why he is and just what the hell he wants out of this loopy thing called “life” anyway.

Well, then Fitch’d have a serious case of the Dead Clown Blues. 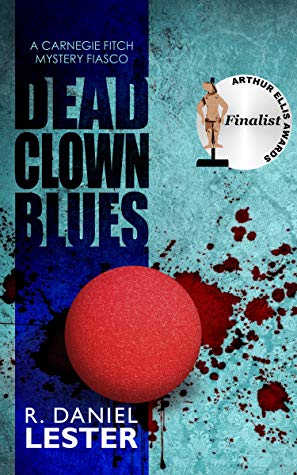 Carnegie Fitch is a Private Eye…he has an office, even if the phone isn’t connected.

One night he offers the janitor, Jim, a whisky….after 3, Jim is drunk, he steals the rest of the bottle and off he crawls.

Later, Fitch hears, Jim had left his office, stole a car, drove through a circus big top and crashed into a lake and drowned. At his funeral Fitch sees a group of mourners in black suits and full face clown make up……..

The Dead Clowns want the money …what money you ask? The money Jim was said to have….but if he didn’t have it, the clowns don’t have it….so who does?

This is pulp fiction at its best, there’s violence, drama and dark humour and even a femme fatale….great fun and thoroughly entertaining.

Thank you to R.Daniel Lester for the opportunity to read this for free. This is my honest and unbiased review.