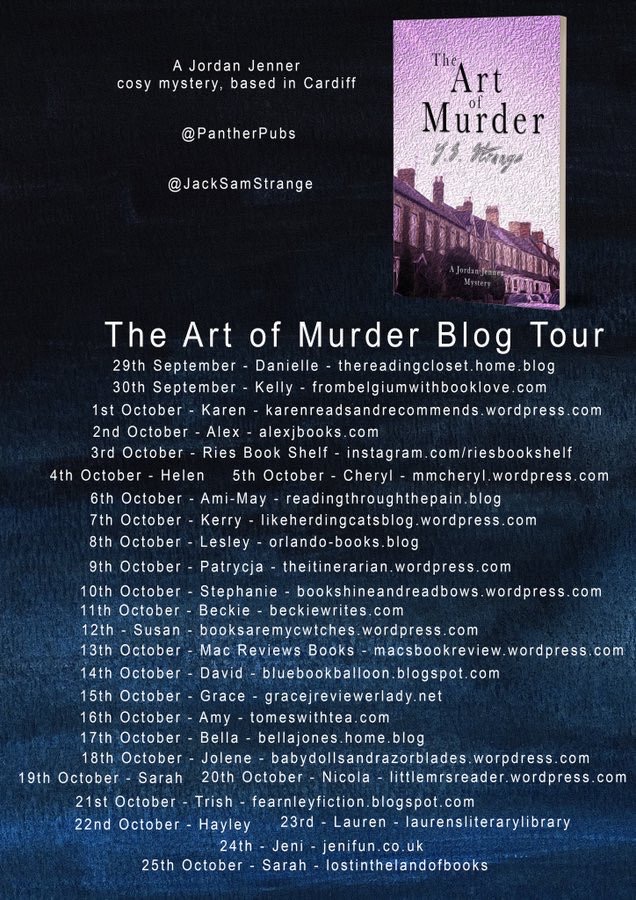 The second in the Jordan Jenner Mysteries series. The follow up to Murder on the Rocks.

Artist Xander Draper is being threatened by a dangerous group. With PI Jordan Jenner’s help, Xander hopes to remain unscathed.

But when Xander is murdered, his body displayed as his final exhibit, Jordan realises the extent of the trouble Xander was in. Now, there are people following Jordan. They know his name, and they want him dead.

Meanwhile, Jordan’s brother Ashley has returned, and he has a secret. As time runs out to solve the murder of the famous artist, Jordan begins to fear his brother may be responsible.

A classic cosy mystery set in the heart of Cardiff. A perfect read for fans of Agatha Christie. A murdered artist. A brother with a deadly secret. A group intent on killing. The Art of Murder is the second in the Jordan Jenner Mysteries series, a cosy murder mystery set in Wales. 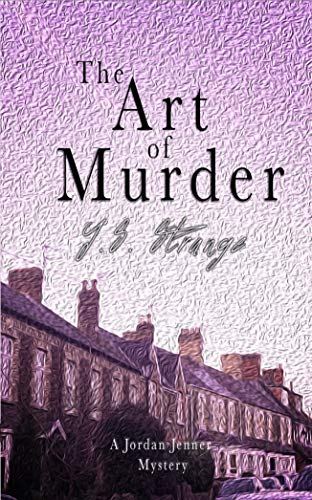 This is #2 in the Jordan Jenner series by J.S. Strange, but can easily be read as a stand-alone.

Jordan Jenner is a private investigator, who works closely with the local police in Wales. His brother Ashley has come home from Australia, leaving his boyfriend Ben behind, he says he’s in trouble, but doesn’t elaborate any further.

On a trip to Amsterdam, Jordan notices they are being followed, even on to their plane home. He lets the police know and wonders why….is Ashley in more trouble than he’s letting on?

Jordan is then approached by Xander Draper a well known artist, he wants Jordan to help identify and stop a group calling themselves Dirty Dolly’s, who are stealing artworks and blackmailing other artists… is Ashley somehow linked to this?

When Xander’s body is found, things get dark….will Jordan be able to find the killer and the reasons why? And why do they want him dead too?

A perfectly paced cosy mystery on the slightly darker side, set in the Art world with dodgy dealings, Murder and a twisty mystery. Jordan is a great, likeable character, flawed and human but so committed to finding the truth. If you like a classic style murder mystery in the vein of Agatha Christie and Joesephine Tey, then you’ll love this. Brilliant.

Thank you to Panther Publishing for the opportunity to take part in this blog tour and a free copy of the ebook. This is my honest and unbiased review.

J.S. Strange is an author from Wales, United Kingdom. He writes crime, mystery and horror. His first novels, published in 2016 and 2017, were set in an apocalyptic London. Murder on the Rocks, was the first in a cozy crime mystery series, featuring a leading gay male detective.

Murder on the Rocks was written by Strange for many reasons. One of those reasons was a lack of representation within the crime genre, particularly with detectives and sleuths. Strange created Jordan Jenner, a private investigator, who lives and works in Cardiff. Murder on the Rocks was written with the intention of shining light on Cardiff, and bringing Cardiff, and furthermore, Wales, into the crime genre.

When Strange doesn’t write, he works in television. He also presents a radio show all about the paranormal. He has an enthusiasm for Britney Spears and cats.

Strange’s new novel, The Art of Murder, is set in Wales and is the second in the Jordan Jenner series. The murder mystery is available now.