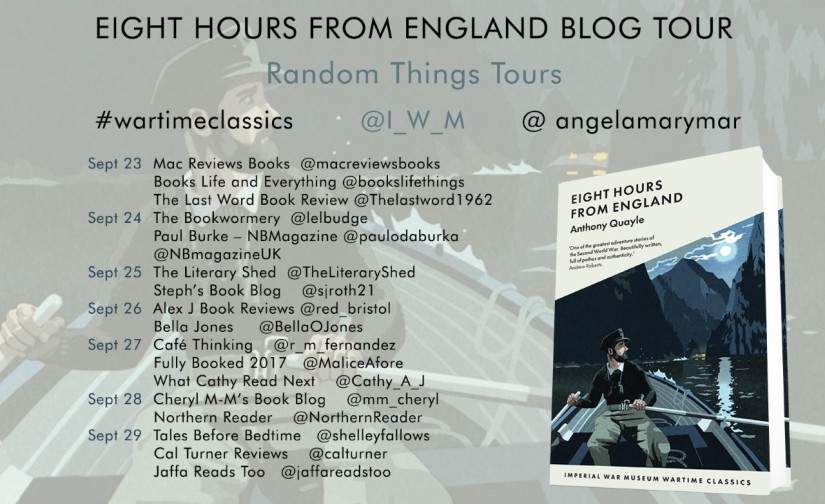 Eight Hours from England by Anthony Quayle – A candid account of SOE operations in occupied Europe described by Andrew Roberts as ‘As well as being one of our greatest actors, Anthony Quayle was an intrepid war hero and his autobiographical novel is one of the greatest adventure stories of the Second World War. Beautifully written and full of pathos and authenticity, it brings alive the terrible moral decisions that have to be taken by soldiers under unimaginable pressures in wartime.’

Anthony Quayle was a renowned Shakespearean actor, director and film star and during the Second World War was a Special Operations Executive behind enemy lines in Albania.

Major John Overton is a Special Operations Executive (SOE) and is posted to Nazi occupied Albania, to set up a new camp. He finds chaos, but with determination he tries to overcome the politics, the weather, the landscape and the Albanian people to get the camp ready. Were they really there to help ? Or impose the British way on a different culture?

An adventure story set in wartime, with all its horrors and is all the more remarkable as based on Anthony Quayle’s own experiences. Beautifully written and very moving at times.

Originally published to considerable acclaim, these titles were written either during or just after the Second World War and are currently out of print. Each novel is written directly from the author’s own experience and takes the reader right into the heart of the conflict. They all capture the awful absurdity of war and the trauma and chaos of battle as well as some of the fierce loyalties and black humour that can emerge in extraordinary circumstances. Living through a time of great upheaval, as we are today, each wartime story brings the reality of war alive in a vivid and profoundly moving way and is a timely reminder of what the previous generations experienced.

The remarkable IWM Library has an outstanding literary collection and was an integral part of Imperial War Museums from its very beginnings. Alan Jeffreys, (Senior Curator, Second World War, Imperial War Museums) searched the library collection to come up with these four launch titles, all of which deserve a new and wider audience. He has written an introduction to each novel that sets them in context and gives the wider historical background and says, ‘Researching the Wartime Classics has been one of the most enjoyable projects I’ve worked on in my years at IWM. It’s been very exciting rediscovering these fantastic novels and helping to bring them to the wider readership they so deserve’.

Each story speaks strongly to IWM’s remit to tell the stories of those who experienced conflict first hand. They cover diverse fronts and topics – preparations for D-Day and the advance into Normandy; the war in Malaya; London during the Blitz and SOE operations in occupied Europe and each author – three men and a woman – all have fascinating back stories. These are Second World War novels about the truth of war written by those who were actually there.

The Four titles are:

From the City, From the Plough by Alexander Baron – A vivid and moving account of preparations for D- Day and the advance into Normandy. Published in the 75th anniversary year of the D-Day landings, this is based on the author’s first-hand experience of D-Day and has been described by Antony Beevor as ‘undoubtedly one of the very greatest British novels of the Second World War.’

Alexander Baron was a widely acclaimed author and screenwriter and his London novels have a wide following. This was his first novel.

Trial by Battle by David Piper – A quietly shattering and searingly authentic depiction of the claustrophobia of jungle warfare in Malaya described by William Boyd as ‘A tremendous rediscovery of a brilliant novel. Extremely well-written, its effects are both sophisticated and visceral. Remarkable’, and VS Naipaul as ‘one of the most absorbing and painful books about jungle warfare that I have read’ and by Frank Kermode as ‘probably the best English novel to come out of the Second World War.’

David Piper was best known as director of the National Portrait Gallery, the Fitzwilliam Museum in Cambridge and the Ashmolean Museum in Oxford. The novel is based on his time serving with the Indian Army in Malaya where he was captured by the Japanese and spent three years as a POW. His son, Tom Piper, was the designer of the hugely successful Blood Swept Lands and Seas of Red installation of ceramic poppies at the Tower of London to commemorate the First World War Centenary.

Eight Hours from England by Anthony Quayle – A candid account of SOE operations in occupied Europe described by Andrew Roberts as ‘As well as being one of our greatest actors, Anthony Quayle was an intrepid war hero and his autobiographical novel is one of the greatest adventure stories of the Second World War. Beautifully written and full of pathos and authenticity, it brings alive the terrible moral decisions that have to be taken by soldiers under unimaginable pressures in wartime.’

Anthony Quayle was a renowned Shakespearean actor, director and film star and during the Second World War was a Special Operations Executive behind enemy lines in Albania.

Plenty Under the Counter by Kathleen Hewitt – a murder mystery about opportunism and the black market set against the backdrop of London during the Blitz. ‘With a dead body on the first page and a debonair