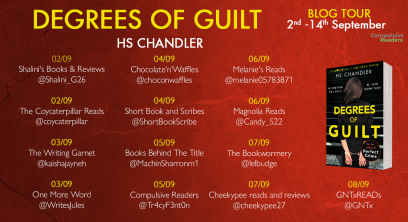 When you read this book, you will think you know every twist in the tale.

Maria is on trial for attempted murder.

She has confessed to the crime and admits that she wanted her husband dead.

Lottie is on the jury, trying to decide Maria’s fate.

She embarks on an illicit affair with a stranger, and her husband can never find out.

You will think you know who is guilty and who is innocent.

You will be wrong.

Maria calls the police to tell them she’s just killed her husband, Edward. She’s so shocked to find he’s still alive and she’s been arrested for attempted murder.

This then becomes a courtroom drama, as we learn about each of the jurors, especially Lottie and Cameron. They slowly begin with a flirtatious after court drink, but this soon becomes a bit more…..But Lottie wants it to end, she has a son and husband to think of….Cameron is quite determined to carry on.

All the while the trial is in full swing as we hear of Maria’s life, and the coercive control exerted by her husband…..this is sometimes hard to read, as it’s such an insidious behaviour that happens behind closed doors and can be almost invisible to those outside. Maria had managed to talk to a support line, where Ruth became her confidant, but she refuses to let her give evidence at the trial…..

Was Maria justified in her actions?

I found this to be a compelling read, about the difficult subjects of coercive control and self harm, but in a realistic and sensitive manner, I did wonder how the seemingly two separate sides of the story would come together, the trial and the jurors deliberations, but I needn’t have worried as it worked so well.  It reminded me a little of 12 Angry Men. An emotive and breathtaking thriller…..I loved it.

Thank you to Tracy and Compulsive Readers for the opportunity to participate in this blog tour, for the promotional materials and a free copy of the ebook.  This is my honest, unbiased review.

A former barrister, HS Chandler is a pseudonym for bestselling crime author Helen Fields, who practised for thirteen years in both family and criminal law. Having extensively prosecuted and defended, she is an avid believer in the right to a fair trial, and in the invaluable role that juries play in the British legal system. Helen was born in Hampshire and now lives in the US.

4 thoughts on “Degrees Of Guilt by HS Chandler – Book Review”