Andrew, the manager of Shanamore Holiday Cottages, watches his only guest via a hidden camera in her room. One night the unthinkable happens: a shadowy figure emerges on-screen, kills her, and destroys the camera. But who is the murderer? How did they know about the camera? And how will Andrew live with himself?

Natalie wishes she’d stayed at home as soon as she arrives in the wintry isolation of Shanamore. There’s something creepy about the manager. She wants to leave, but she can’t-not until she’s found what she’s looking for …

Psycho meets Fatal Attraction in this explosive story about a murder caught on camera. You’ve already missed the start. To get the full picture you must rewind the tape and play it through to the end, no matter how shocking 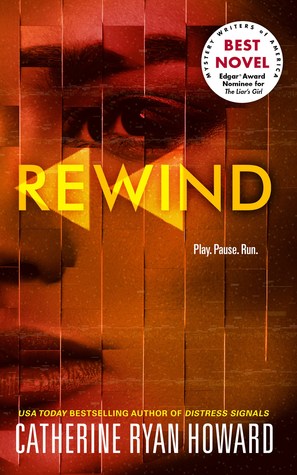 Natalie is an Instagram star, but then she disappears. Her husband has no idea where she’s gone…but someone is watching.

Told in the present with flashbacks to the past this is a psychological thriller with a difference. Play, Pause, Rewind.

Natalie believes her husband has been to Shanamore Cottages with someone else, she finds a poetry book in cottage Number 6….it’s hers. How did it get there?

When a video appears, it shows a brutal murder in the cottage, so many questions are raised….why were there cameras in the cottages?, where is the body? Was it Natalie?

There’s Andrew the cottage manager with a secret, Richard, a creepy, aggressive loner who wanders around the area, Audrey a journalist looking into the missing Natalie’s case and Jennifer a hotel,reception, how are these linked and just who is telling the truth?

I found this incredibly tense and a real page turner, a proper whodunnit. Yes, the ending is very abrupt but it felt right…any more would have just been padding. Original and totally believable. I can thoroughly recommend it.

Thank you to The Pigeonhole for the opportunity to read this for free. This is my honest and unbiased review.

Catherine Ryan Howard was born in Cork, Ireland, in 1982. Prior to writing full-time, Catherine worked as a campsite courier in France and a front desk agent in Walt Disney World, Florida, and most recently was a social media marketer for a major publisher. She is currently studying for a BA in English at Trinity College Dublin.

Rachel Stone’s world was destroyed by a stalker, Alan Griffin. After he went to prison, she rebuilt her life.

Now she has a three-year-old daughter and is in a new relationship. But someone is stalking her again. Her phone, her emails and her social media are hacked.

Rachel believes it’s Griffin, out of prison and looking for revenge. She needs to find him and make him leave her alone. But as Rachel is drawn into a hunt, she realises that something even more horrific is happening – something that will make her confront the childhood that has lingered like a ghost, and will force her to face the truth about her new life.

Is Griffin the one ruining her life? Or is someone else, someone far more dangerous, responsible?

When Rachel was a teenager her life was ruined by a stalker, Alan Griffin. As a result her anorexia really took hold and she became very ill and hospitalised.

With the help of her friend, Mark, they turned the tables on him and Griffin was jailed. Rachel recovered and now has a daughter with her friend Mark, but recently, odd things have been happening in her life….an old photo was sent to her boyfriend, his and her friends, and messages have been sent from her phone, then her salary is taken for her account…..just who is doing this?

When she find out Griffin has been released from Broadmoor, she believes it to be him……

With the help of her friend and colleague, fellow nurse, Spence…she hopes to put an end to it all……..but just who can she trust?

This is a scary read as it shows just how easy it is for someone to gather personal information from us in this digital age, with phishing and social engineering it really does show the danger of sharing too much. It also covers the difficult subject of eating disorders and mental health, but in a sensitive manner which helps a little to understand this insidious disease.

Will Rachel find out who is destroying her life?  Totally engrossing from start to finish.

Originally from Manchester, Dan managed to escape the rain and now lives in relative dryness in the beautiful village of Holloway, North London, pretty much next to the prison, with his patient wife, beautiful daughter, and ridiculously hairy dog.

By day he works as a data security consultant, demonstrating to corporations that should know better just how easy it is for hackers to access their most sensitive information. As a writer, his short stories have been widely published both in print and online, and he has twice been shortlisted for the Bridport prize. In 2013 he completed a Masters in Creative Writing at Brunel University.

His debut novel, a psychological thriller called The Regret, came from the idea that you can be attacked by anyone in the world, from anywhere, at any time; someone you’ve never met in person can reach into your life and mess things around. It’s chilling stuff, and through his work he knows how easy it is to do.

Come say hi on Twitter @danmalakin, or read some of his short stories on http://www.danmalakin.com