The Awakening Aten envelops the reader in an Egypt of whispers and fears, of webs within webs, deceit upon deceit. Its themes of murder, intrigue, political and religious conflict, corruption, tomb robbing, war and executions are set against a background of fundamental ideological change.

Ancient Egypt is seen through the eyes of two families; one royal, the other commoner. Yuya, whose tomb is in the Valley of the Kings, is a foreigner who rises from slavery to become Regent to an infant Pharaoh and thus, the most powerful man in the world’s wealthiest empire. His children and descendants will remain at the very heart of the country’s destiny. Kha is a tomb painter and builder who experiences both the despair of imprisonment and the horror of war. As Overseer of the King’s Works he restores the Great Sphinx, and inscribes the ‘Dream Stela’ placed between its paws, still visible today. Through tragic and deathly events his family and that of Yuya become entwined.

This is the fictional tale of real people, whose possessions and artefacts can be seen in museums throughout the world. It gives a voice to those people, inspired by their personal items, buried with them 3,000 years ago.

Partly based on factual elements of Egyptian history.

The story revolves around three men who escape jail, are then given positions by the King of Egypt and become rich and powerful….

There  are a lot of characters and it does take quite a while to get these in your head and let the story flow, but once you do you become immersed in the politics, and the culture of the gods, with murder, lies and even tomb robbing….

A character driven epic with beautifully descriptive writing that brings this ancient world to life.

I am of Irish heritage and was the first member of my immediate family to be born outside of Ireland. My professional life has caused me to travel the world. I am now looking forward to settling in the North East of England, to concentrate on writing.

A graduate in Law from Leicester University, after working for some years in a commercial environment, I qualified as a Solicitor in 1981.

My career developed in an unusual way and I have lived and worked at various times in Italy, Brazil, the United States, India and Germany.

I have always had a love and fascination for history. A holiday in Egypt sparked a particular passion for Ancient Egypt, especially the latter part of the 18th Dynasty. A history, which Pharaoh Horemeb (Djeser-Kheperu-Ra circa 1319-1292 BCE) tried to destroy and which only came to light following the discovery of Tutankhamun’s tomb in 1922.

‘The Awakening Aten’ is the culmination of many years of research.

I have built up a substantial collection of academic books and novels on Ancient Egypt, its customs, traditions and daily life. I am fortunate to have been able to visit all of the major museums containing artefacts from Egypt throughout the world, as well as spending months in Egypt itself studying the funereal valleys and other sites. All of this supplemented by internet research.

This novel is the first in a planned five book series, looking at the fictional lives of real people through a period of major political and religious change, spanning approximately 130 years.

My hobbies are reading, which I enjoy as much as I do writing, and taking bracing walks along the North East Coast and in the Northumberland Hills.

She thought it was pork. She was wrong.

The first time hapless food inspector Emily Underwood meets butcher Frank Pinch, he’s not got much at all in his display counters. But what he does have is a rather unusual plan to restock his shelves. The next time they bump into each other, he’s won an award for his sausages but is running out of meat.

Can Frank keep up production of his unusually tasty sausages? Will Emily discover the source of Frank’s award-winning meat? And what will happen the next time she tries to inspect his butcher’s shop?

Book 1 in the Rub-a-Dub-Dub trilogy, this deliciously British dark comedy will change the way you look at sausages forever. 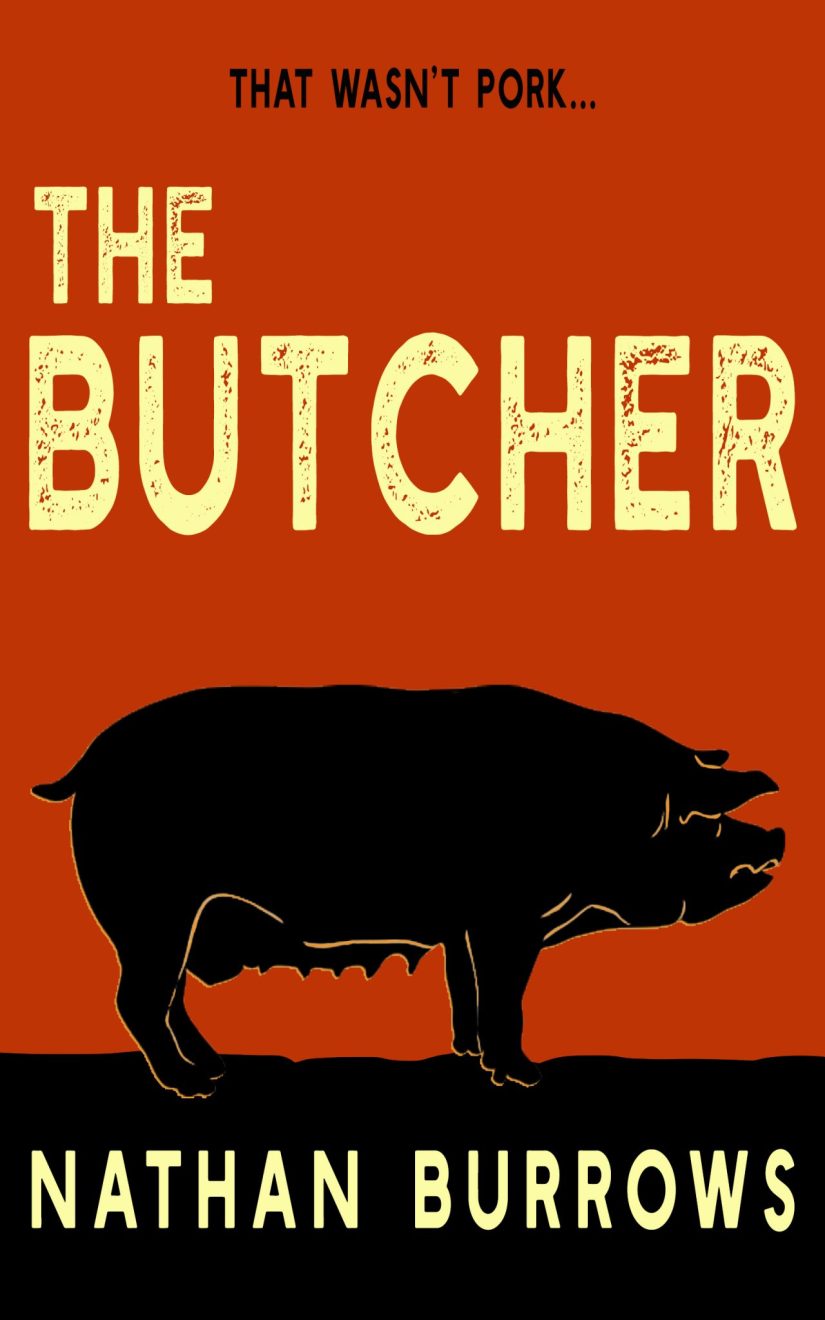 This is dark humour at its darkest…

There is then an accident on Tim’s farm, and all of a sudden the supply of ‘pork’ improves and Frank’s customers are loving the new sausages!!!!

This will make you laugh and then feel quite ill at times……not sure I’ll be able to eat sausages ever again !

Nathan Burrows is a writer based in Norfolk in the United Kingdom. His debut novel, a legal thriller called ‘Blind Justice’, was published in March 2018.

He’s also the author of a dark comedy trilogy set in Norfolk. The first in the series is ‘The Butcher’, a deliciously funny story about – amongst other things – sausages. The second in the series is ‘The Baker’, which features Norfolk’s most useless cult. And finally, ‘The Candlestick Maker’ is about a fitness instructor with a difference.

The next book to be released will be ‘Man Down’, a return to more traditional thrillers. It’s a military story set in Afghanistan which will be released in the Autumn, 2019. Also releasing later in the year is ‘Finding Milly’, which explores just how far a man will go to find his missing daughter.

Nathan’s a keen reader as well as a writer. He occasionally runs marathons, has a Norwich City football club season ticket, and is the proud part-owner of a Daschund puppy called Bertie.

Published in ebook, audio and paperback formats in July 2018

The Butcher is available to download in ebook format for only 99p/99c for a limited time.

When she hears about the suicide of a local train driver who has jumped off the roof of a block of flats, leaving a suicide note confessing to four mortal ‘accidents’ on the train tracks, she decides to investigate. For the police the case is closed (suicide is suicide), for Veronica it is the beginning of a journey that takes her into an unfamiliar world of grinding poverty, junkie infested neighborhoods, and train drivers on commuter lines haunted by the memory of bodies hit at speed by their locomotives in the middle of the night.

Aided by a train driver informant, a junkie in rehab and two street kids willing to risk everything for a can of Coke, she uncovers a group of men involved in betting on working-class youngsters convinced to play Russian roulette by standing in front of fast-coming trains to see who endures the longest.

With bodies of children crushed under tons of steel, those of adults yielding to relentless desire, the resolution of the investigation reveals the deep bonds which unite desire and death.

Veronica is a journalist for a popular magazine, she’s talented and has an eye for a story. When she hears of a child’s death on the railway and the train driver is traumatised, she feels this could be interesting from a human emotion side, but she soon finds there is so much more to the story….

Poor young boys, are drawn to a local football team, the coach Rivero offers them a chance to make some money, a game he says. This evil man sets two boys a game of chicken, against a train, the last one to jump off the tracks is the winner!! Oh and men gamble on this……

The train drivers on the routes, are on tenterhooks their whole shift, just waiting to see someone on the tracks and to hear the crunch of bone……

Veronica finds out about this and is determined to make it end, but puts herself and anyone close to her in real danger…….can she stop this barbarity??

I really love the way this is written, Veronica is a strong, single woman who pees, has periods and enjoys sex her way….not often you read of the real parts of life in this way..

Set in Buenos Aires, It also shows the dark side of life, the exploitation of those in poverty, the young and desperate….a fascinating and utterly engaging read. I’ve been very lucky to read some excellent novels recently but this is one of the best I’ve read this year….

The Author and the Translator 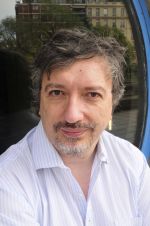 Sergio Olguín was born in Buenos Aires in 1967 and was a journalist before turning to fiction. Olguín has won a number of awards, among others the Premio Tusquets 2009 for his novel Oscura monótona sangre (“Dark Monotonous Blood“) His books have been translated into German, French and Italian. The Fragility of Bodies is his first novel to be translated into English.

The translator Miranda France is the author of two acclaimed volumes of travel writing: Don Quixote’s Delusions and Bad Times in Buenos Aires. She has also written the novels Hill Farm and The Day Before the Fire and translated much Latin American fiction, including Claudia Piñeiro’s novels for Bitter Lemon Press.