A tiny island community is stunned by the discovery of a long-buried body.

For Stella Harvey, the news is doubly shocking, as the body is found in the garden of her childhood home. The home her family fled without explanation twenty-five years ago.

Now, questioning her past and desperate to unearth the truth, Stella returns to the Dorset island. But she quickly finds that the community she left isn’t as welcoming as she remembers – and that people in it will go to any length to protect their secrets.

But one thing rings true…

You can’t bury the truth forever.

This starts with eleven year old Stella and her family leaving her beloved home on the isolated Evergreen Island. It’s dark and stormy, but her father insists they leave. Stella is heartbroken, leaving her best friend Jill…

Her sister, Bonnie is glad to be leaving, she felt she didn’t belong, especially after meeting Iona.

The girls also have a brother, Danny, who’s a quiet boy and just wants to be by himself…..others on the island think he’s a bit odd.

The story jumps to 2018, with Stella, now in her thirties and a family counsellor. Her parents split up, her mother then died, Danny just walked out re has been no contact since and Bonnie is an alcoholic……just what went happened on that island to mess them all up so much?

Watching the news one evening, Stella recognises their old home, a body has been found buried in the garden……is it someone they know?

Stella returns to the island, she feels she has come home at last….but she is determined to find out why they had to leave so suddenly, but what secrets will she find when delving into the past?

A stunning tale of secrets and lies that may break what’s left of the family…..should some secrets remain buried? An intriguing and atmospheric read.

My thanks to Rachel Kennedy, Publicity Manager, Arrow & Century, for a free copy of the book. This is my honest and unbiased review.

Heidi Parks’ debut novel Now You SeemHer twice reached the Sunday Times bestseller list, first in hardback in July 2018 at No.9 and again at No.6 in paperback in March 2019 where it was a Richard & Judy Book Club pick for Spring 2019. Now You See Her has sold over 120,000 copies across formats to date and it has reached a staggering 200 five star reviews on Amazon from readers. It has also been optioned for TV from the production company behind BBC One’s The Minaturist and Channel 4’s National Treasure.

Heidi Perks worked as a marketing director for a financial director before leaving to become a full-time mother and writer, She is a graduate of the inaugural Curtis Brown Creative Online Novel Writing Course (the only creative writing school run by a literary agency). Follow Heidi on Twitter @HeidiPerksBooks and join in the conversation with #ComeBackForMe. 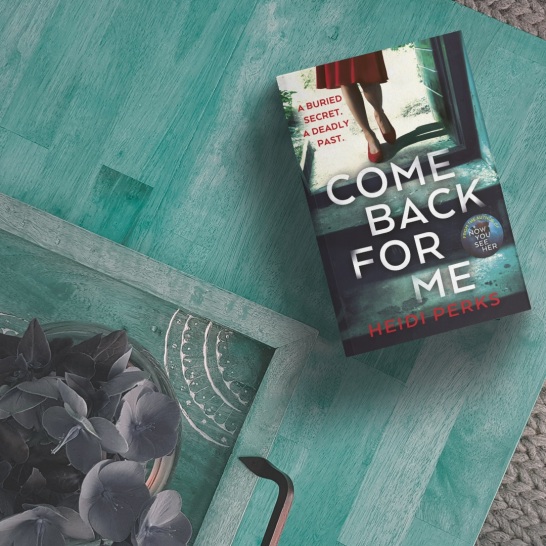