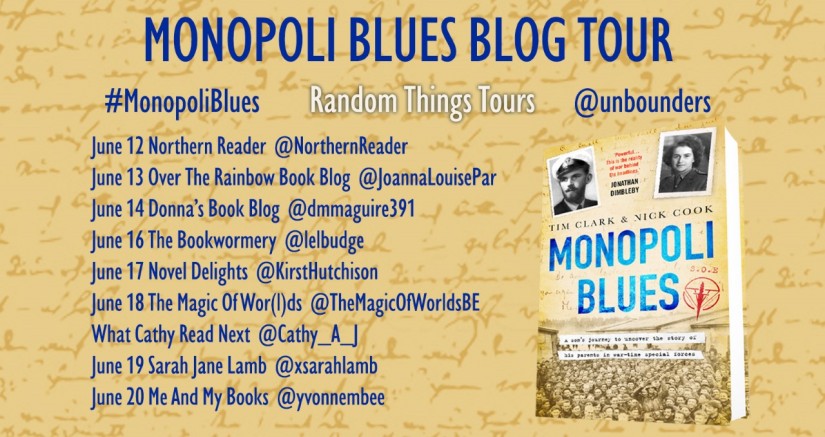 ‘A gripping tale of wartime exploits, an unlikely love story, and a son’s journey to discover his father’s secret war’ Joshua Levine, author of Dunkirk.

He left behind the girl he had fallen in love with, Marjorie, his radio operator. Captured by the enemy, Bob’s fate hangs in the balance and Marjorie won’t know for six months whether he is alive or dead…

Monopoli Blues recounts the story of Tim Clark’s journey to uncover the story of his parents’ war – and the truth behind the betrayal of his father’s Clarion mission to the Nazis.

I found this to be a wonderful book, it’s how history of war should be written from the personal lives and experiences of ordinary men and women in sometimes extraordinary circumstances.

This is beautifully written and captures the emotions and atmosphere of the time. It shows just how war affected those involved, the fear and suffering they experienced and then kept it all bottled up to protect those around them.

This is an epic story of love, bravery, humility, war and betrayal. This will bring tears to your eyes more than once as Bob and Marjorie capture your heart. Totally spellbinding and magnificent…..a must read.

Tim Clark spent a large part of his career working as a lawyer at one of the world’s leading firms specialising in M+A and corporate work in the UK and internationally, ultimately becoming Senior Partner. Since retiring as a lawyer, Tim has taken on board positions on a number of corporate, arts and charitable organisations, and senior advisory roles at a number of international think tanks.

Nick Cook is an author, journalist, broadcaster and entrepreneur. In 1986, he joined the world-renowned Jane’s Defence Weekly, initially as a reporter, rising quickly to become Aviation Editor, a position he held until 2005. His first novel, Angel, Archangel, was published in 1989 to critical acclaim. In 2001, Cook’s first non-fiction title, The Hunt For Zero Point, was published, reaching Number 1 in Amazon’s Non-Fiction charts. He has also written, hosted and produced two documentaries about the world of aerospace and defence – Billion Dollar Secret and an Alien History of Planet Earth. He lives and works with his wife and two children in London.

Tim Clark and Nick Cook have spoken about the book to sold-out audiences at the Chalke Valley History Festival and the National Theatre.

The book has received considerable attention in the media: the authors have been interviewed on Sky News and BBC Radio London, and a glowing review from William Boyd was published in New Statesman. A feature written by Tim Clark has also appeared in the i newspaper.