Enter Psychotopia, a dark new dystopian novel from the author of the acclaimed Silas Quinn mysteries.

PSYCHOTOPIA, LEVEL ONE. Create your own boutique psychopath, then deceive, manipulate and be ruthless, spreading mayhem and destruction to reach the next levels.

It’s the computer game for our times. After all, the amount of crazy in the world is increasing. Senseless violence on the streets is becoming the norm.

Can Dr Arbus’s ground-breaking device identify and neutralize psychopaths before it’s too late? In this increasingly dysfunctional world, surely Callum standing by Aimee after her devastating encounter with Charlie is proof that real love and goodness can still win in a world that’s increasingly rotten . . . Or can it?

Psychotopia will mess with your mind….

Alpha Games are creating a VR game, where you create your own Psychopath with varying degrees of disorders….you choose!..

Serial killers get more points for more kills, the longer a psychopath remains undetected the better for the gamer……

But, the real world is struggling with a rise in violence, this is becoming the norm……adults and children alike are the perpetrators and victims.

The cops are struggling, the hospitals are grim, to say the least……society is breaking down and the psychopath’s are starting to outnumber the non-psychopaths…..a new disorder is identified…the PGD….Psychopath Generated Disorder.

The story is told from several angles, the cop, Inspector Parfitt…an unlikeable jerk…..Aimee, who had been used and cast off by Charlie…..her friend Callum comes to her rescue….and Charlie\Oliver a creepy, nasty, psychopath. It’s chapters are separated by memos from Alpha Games about their game development…(the spiders ….urgh).

It plays on our fears of violent video games and the worrying suspicions that those who run our countries are potential psychopaths.

Then Dr Argus arrives, with his machine to identify Psychopaths in seconds, his plan is to test all children, sterilise them and end the cycle……but is that all?

This is a horrifying, disturbing and yet absolutely fascinating tale that makes you wonder….is this possible? Is it happening now?????…..Just watch the News, the everyday violence,  it makes Psychotopia a very scary read. Brilliant, thought provoking and terrifying writing by R N Morris.

Thank you to Rachel’s Random Resources for the opportunity to participate in this blog tour and for the promotional materials and a free copy of the ebook. This is my honest and unbiased review.

R. N. Morris is the author of ten novels. The latest is PSYCHOTOPIA, published 31 October, 2018.

A Gentle Axe, was published by Faber and Faber in 2007. Set in St Petersburg in the nineteenth century, it features Porfiry Petrovich, the investigating magistrate from Dostoevsky’s great novel, Crime and Punishment. The book was published in many countries, including Russia. He followed that up with A Vengeful Longing, which was shortlisted for the Duncan Lawrie Dagger Award (as the CWA Gold Dagger was briefly known). A Razor Wrapped in Silk came next, followed by The Cleansing Flames, which was nominated for the Ellis Peters Historical Novel Dagger.

The Silas Quinn series of novels, set in London in 1914, began with Summon Up The Blood, followed by The Mannequin House, The Dark Palace and The Red Hand of Fury. The next novel in the series, The White Feather Killer, will be published in April 2019.

He also wrote the libretto to the opera When The Flame Dies, composed by Ed Hughes.

*Terms and Conditions –Worldwide entries welcome.  Please enter using the Rafflecopter box below.  The winner will be selected at random via Rafflecopter from all valid entries and will be notified by Twitter and/or email. If no response is received within 7 days then Rachel’s Random Resources reserves the right to select an alternative winner. Open to all entrants aged 18 or over.  Any personal data given as part of the competition entry is used for this purpose only and will not be shared with third parties, with the exception of the winners’ information. This will passed to the giveaway organiser and used only for fulfilment of the prize, after which time Rachel’s Random Resources will delete the data.  I am not responsible for despatch or delivery of the prize.

Isabel Long is a bit banged up from her last case with a broken collarbone and her arm in a sling. But that doesn’t stop her from pouring beer at the Rooster Bar or taking her third case with Gary Beaumont, a local drug dealer who once terrorised her. Gary is convinced his brother didn’t jump off a bridge known for suicides. Somebody pushed him.

Gary’s brother was a boozer who drove for a highway crew. But what interests Isabel and her ‘Watson’ — her 93-year-old mother who lives with her — is that the man wrote poetry.

The chief suspects are one of Gary’s business associates and a famous poet who plagiarised his brother’s poetry for an award-winning book. Yes, he was that good.

As a journalist, Isabel did regular meet-ups with her sources for stories. She called it checking the traps. She does the same as a private investigator, and this time, she’ll make sure she doesn’t get caught in one.

Isabel is still recovering from her ‘accident’, her arms in a sling due to a broken collarbone…..will that stop her…..No is the answer!

Her business partner, is her 93 year old mother, sharp and with a heavy foot in her new red car.

Isabel takes on a new case involving the death of Cary, his brother, Gary Beaumont is the client. He doesn’t believe Cary would have jumped off that cliff !

The case involves a famous poet, a local drug dealer, and of course the well informed ‘Old Farts’.

There’s a bit of humour, tension, and some romance for Isabel and Jack in this clever whodunnit. The characters are realistic and believable, I really liked Isabel’s humour and that she’s no youngster but a mature, feisty and independent woman…… and her mum, Maria, is a sweetheart….a very shrewd lady.

Isabel does get herself into some scrapes again…..and amidst claims of murder, plagiarism, drugs and alcohol problems, she finds the solution in a tension and tears filled ending. Marvellously engaging writing by Joan Livingston….I will be looking for more in the series now!

Thank you to Rachel’s Random Resources for the opportunity to participate in this blog tour and for the promotional materials and a free copy of the ebook and this is my honest, unbiased review.

Joan Livingston is the author of novels for adult and young readers. Checking the Traps, published by Crooked Cat Books, is the third in the mystery series featuring Isabel Long, a longtime journalist who becomes an amateur P.I. The first two are Chasing the Case and Redneck’s Revenge.

An award-winning journalist, she started as a reporter covering the hilltowns of Western Massachusetts. She was an editor, columnist, and the managing editor of The Taos News, which won numerous state and national awards during her tenure.

After eleven years in Northern New Mexico, she returned to rural Western Massachusetts, which is the setting of much of her adult fiction, including the Isabel Long mystery series. 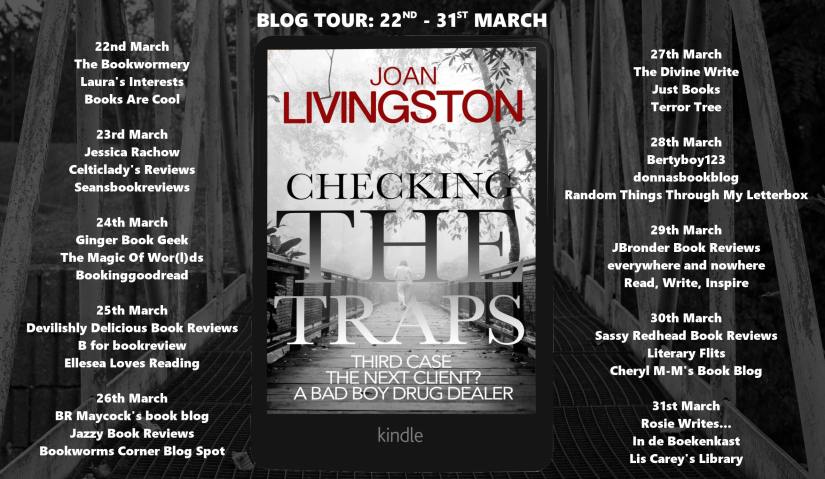