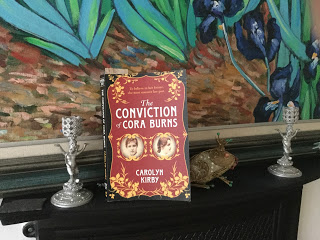 Written by Carolyn Kirby, The Conviction of Cora Burns is set in 1880’s Birmingham. Cora has had a difficult start in life after being born in a Gaol, then sent to the workhouse and as she grew up, at sixteen was sent to work as a laundress at the Asylum.

Her childhood friend, Alice Salt was a bad influence and many awful things happened, which Cora cannot fully recall. Cora ends up in Gaol herself for 19 months but when released is sent to work for the Jerwoods as a between maid. There she settles in and is good at her job, but she meets a young girl Violet, who is part of an experiment into nature versus nurture by Mr Jerwood.

Cora begins to believe there is more going on in the house and that she is involved somehow as the mistress of the house calls her Annie in her more lucid moments.

This is historical fiction with gothic feel, the dark atmosphere of the time, with women being admitted to asylums for depression or ‘hysteria’ and generally treated poorly. The characters are well written and rounded and Cora for all her ‘issues‘ is likeable and you have such sympathy for her. The language of the book is beautiful, the intrigue believable and it comes to a truly satisfying end. I can see this being a must read and a favourite for book clubs everywhere.