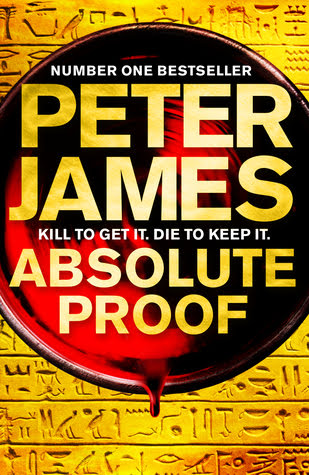 Peter James has written a thriller that reminded me a little of The Da Vinci Code by Dan Brown.

I did find it hard to get into, initially, but then I just got hooked and had to know more.

The protagonist, Ross Hunter is a freelance investigative journalist and is married to Imogen who is expecting their first child, they have their problems due to Imo having had an affair.

He gets a call from a retired, ex-RAF, ex-History of Art professor, Dr Harry Cook. Harry tries to convince Ross that he has absolute proof that God exists. Thinking the man Harry is a bit of a crank, he nevertheless agrees to meet him and to read a manuscript. There is only the one copy of this manuscript and Harry is initially reluctant to let it out of his sight.

Ross then heads to Glastonbury using the co-ordinates given him by Harry and he finds evidence of recent digging but eventually finds some items in a well that he feels may be significant.

Even though he finds a dead body, related to the case, he is hooked on the possibility of an incredible story, even though the Church wold like it kept quiet.

Ross travels to Egypt and Los Angeles as the other co-ordinates are revealed and each provide further evidence to support Harry’s story and leads to events and a person whose identity will impact the world.

Ross is offered large amounts of money for the manuscript, which his wife feels he should take due to the amount of danger they find themselves in, but Ross has scruples.

Peter James has written an absorbing and exciting thriller, which covers how many factions in this world would feel threatened if there was the absolute proof of God’s existence. It’s an entertaining read that pulls you into the story with such ease, you will definitely want to know just how it ends.